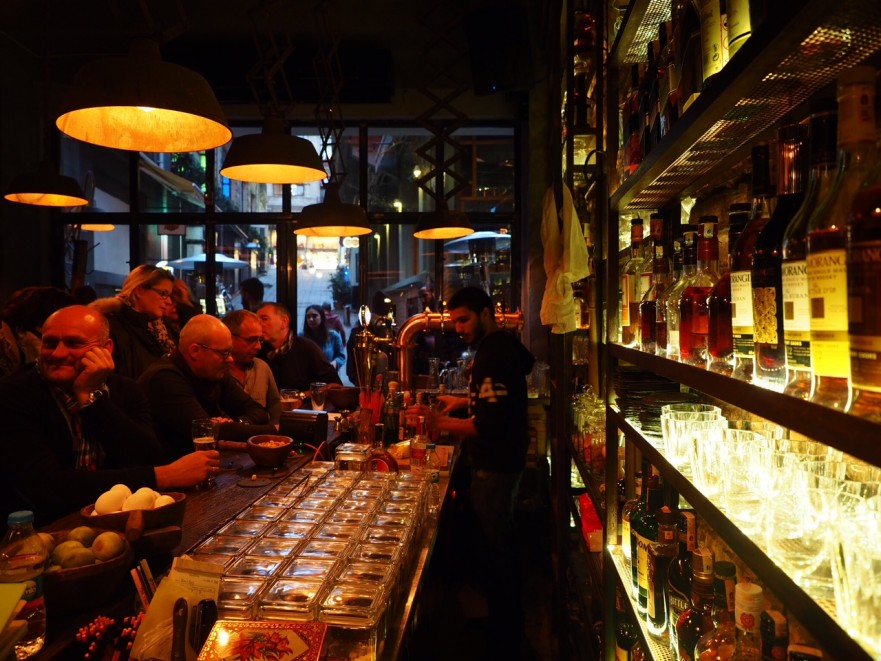 Whenever I visit foreign countries I found myself on the pursuit of special whisky, beer and cocktail bars and write them on my blog. It gives me a simple pleasure to experience the drink culture and different spirits of those places. Until now I have always stated that there should be a bar or restaurant which offers a big variety of alcoholic drinks which is of high quality in experience and audience. Tourists coming to İstanbul should have an option to visit this kind of bars. Step by step number of gastronomic places like these started to increase. First the cocktail bars initiated a trend which was continued by a big explosion of craft beer bars. Now the drink culture has a new perspective by adding a whisky concept on it.

I always though a bar like this would be stated in nish districts like Nişantaşı or Bebek. However, The Barley, opened in Tomtom, Beyoğlu made a big surprise. Despite its meaning in the dictionary I consider The Barley as a “Malt Bar” because of the whisky and beer varieties it has. Around 100 beers and 150 whiskies are written on the menu. But, what makes The Barley different? The Barley, did something that is easy to think but hard to implement and put every whisky and beer that can be sold in Turkey. The Barley is trying to deliver the drink culture to its audience by overcoming the procurement and brand race problems. You can easily feel that when you look at the menu. Both beer and whisky menus are categorized first among type and then among countries. Even before giving an order you receive some information about what you want.

The prices of whiskies are neatly determined by taking the bottle price into consideration. Thus, a premium whisky like Lagavulin 16 costs like 43 TL where you can find it for 80 TL at most of the places. The cheapest whisky is J&B Rare by 22TL price tag and the most expensive one is Glenmorangie Quarter Century Gift Box, which costs 140 TL. You chose the whisky and ordered it. Now what?? You receive a wood tray containing a tumbler having 6 cl whisky (which is %50 more than any other bars I tried), a little lab container of water and a little plate offering aperatives which are neatly determined by Chef Ömer Bozyap by a big effort. He tried every single whisky in the bar and determined companions for them. The other choice while choosing your whisky could be the “Journey” part. The Barley constructed 6 different tours which are namely Johnnie Walker Tour, Speyside 12 Tour, Bourbon Tour, General Tour, Islay Tour ve Cask Set. Every glass has 2 cl of whisky and in total you can try 8 to 10 cl of whisky in this tour, which gets you familiar with different types and countries. Paying 68 TL for Lagavulin, Laphroaig, Caol Ila and Bunnahabhain in Islay Tour is something extraordinary in this country. Tasting 5 different Johnnie Walker expressions for the price of one glass of Blue Label makes JW Tour also special. For whisky beginners, General Tour is great to go where they will get to know Scotland better.

Also the Japanese whiskies and new bourbons that will enter Turkey in 2016 are also stated in the menu and apparently it gives us the chills. Food menu is made of three parts, ‘Introduction’, ‘Body’ and ‘Conclusion’. Truely saying, even now when the Conlusion part is missing, dishes are satisfactory. Crispy Bacon, Fried Pickles, Shrimp TNT, Grilled Pork Sausage and 9 Layers Pastry are now my favourites. A big congrats to Mr. Bozyap for that.

I still didnot give a shot to cocktails, however menu looks simple and nice. There are the ‘Classical Cocktails’ and the ‘Signature Cocktails’ sold for 35 and 40 TL respectively. The signature cocktail No5 is really interesting as it has Gentleman Jack, Creme De Cassis, blackberry, sweet&sour ve vanilla.

Who are the ones behind this idea? Berti Palombo, the manager of Tektekçi and Birol Namoğlu who is a familiar face from the music band Gripin. They both deserve a big applause.

Wishing a successful and long business life to The Barley. Slainte!!!

LET'S HEAD TO THE BARLEY