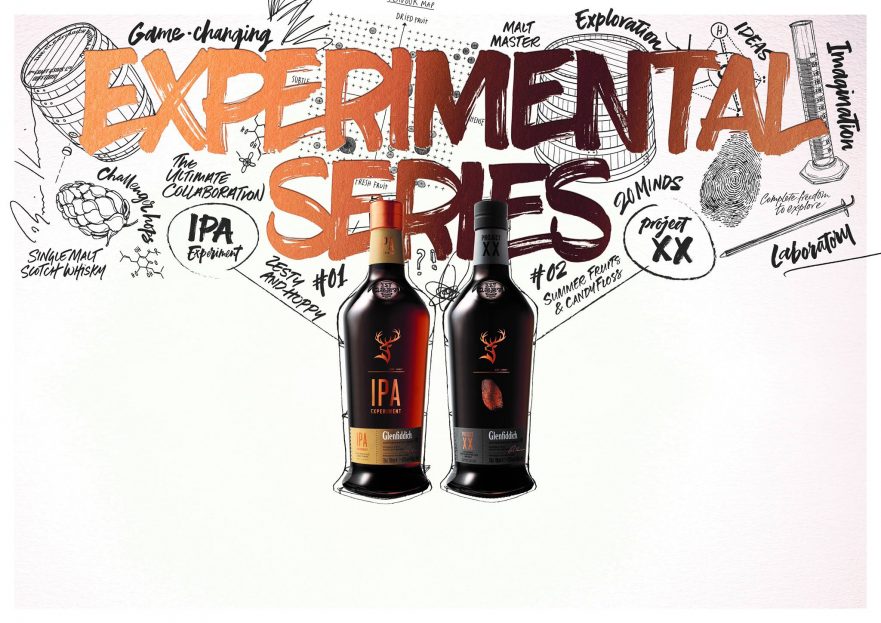 First expression of the Glenfiddich Experimental Series is the IPA Experiment, which is a NAS whisky and released with 43% ABV. Whisky rests for three months in barrels which are seasoned with IPA beers from Speyside Craft Brewery. During the production of beer ‘British Challenger’ hops are used, which gives beer rather more fruity, herbal aromas with cedar notes. Glenfiddich’s Malt Master Brian Kinsman states that this character of the hops complements the fruity character of Glenfiddich. According to Kinsman, this whisky is vibrant and unusual. During production the intensive experimental process involved creating three separate brews of different strengths and levels of hops. Brian Kinsman seasoned up to nine American oak casks at a time with the IPA brews. The time that the beer penetrated into the oak casks varied. Considering the name, Brian Kinsman and brewery’s founder Seb Jones, it seems like we have a great whisky to ‘experiment’ in front of us. To be honest, Glenfiddich Project XX made me more excited. 20 whisky experts (Glenfiddich Brand Ambassadors) from 16 countries and Malt Master Brian Kinsman collaborated in this project. Every expert chose a cask from a warehouse in Glenfiddich Distillery in Dufftown, regarding to their taste including old Port pipes to ancient sherry butts and first fill bourbon casks. Brian Kinsman vatted whiskies from these casks and brings out the final liquid.

Glenfiddich’s Global Brand Ambassador, Struan Grant Ralph said: “Taking part in the creative process of selecting the 20 casks that evolved into Glenfiddich Project XX was incredible. Brian has produced a one-of-a-kind whisky which is unmistakably Glenfiddich in style, but with the complexity and depth imparted by 20 different barrels of varying size, shape, wood type and origin. As a snapshot of the incredible whisky stocks at our distillery in Dufftown, Glenfiddich Project XX is a liquid that will intrigue and appeal to single malt enthusiasts all over the world.” Released at 47% ABV, whisky is named after Glenfiddich’s 20 brand ambassadors stated in Roman numbers ‘XX’. I have to admit that I loved the fingerprint on the bottle. Nose: Classic Glenfiddich fruitiness with hints of apple blossom, summer fruits and ripe pear. A beautiful balance of oak with rich creamy vanilla, barley sugar and a hint of liquorice and subtle spice
Taste: A refined and balanced flavour with candy floss sweetness and a rich vanilla oakiness. Deep and mellow, the initial sweetness is complemented by unusual notes of toasted almonds, cinnamon and a hint of crisp tannin
Finish: Long lasting with a lingering sweet oakiness